Creativity Prove That Illustration Can Make a Difference

Creativity Prove That Illustration Can Make a Difference

What Kristina Filler, Sofia Romagnolo and Izzy Wheels have in common, is that they all use the power of illustration to spread a message, make a change and give a voice to the less heard members of society. Each does so in their own way. From empowering wheelchair users through custom wheel covers, to daring to illustrate controversial topics, to raising awareness of gun violence through illustration, these women show us how design can make a difference. Here are their three separate stories that remind us, yet again, of the power and impact that design can have on society.

Milan-based illustrator, Sofia Romagnolo (a.k.a. Blu Edamame) sees art as a way to share her personal vision and spread an emphatic message around the world. In her own words, “art is a powerful weapon to educate, excite and let out a rebel yell.” And this she does, in every one of her illustrations. Feeling strongly about the way women depict themselves, and are depicted, in our culture, Sofia bases her works around the female body, in all its beautiful and natural forms.

Pattern by Blu Edamame. On her Instagram post, Sofia writes, “Time to set ourself free from the concept of “bikini body” and the damaging culture of detox products and cleanses.”

“Us women have to stop letting other people set the standard for what we should look like or do with our bodies,” says Sofia. “A woman that takes care of herself, in every aspect, is portrayed as vain, lustful, and sexual in a very deprecative way. With this perception, usually if not always, objectification, fetishisation and disrespect come naturally… My goal is to help spread the message that our body is beautiful and there’s no shame in taking care of it.”

To tackle this and help demolish the stigmatization behind free sexual expression, Sofia aims to give a fun, colorful and light hearted twist on topics that are generally considered dark or shameful. “Exploring ourselves should be an act of love and a celebration of our bodies – it really helps in understanding what we like, what we don’t and how our body works,” Sofia explains. “It’s so very important even for spotting if something is wrong before it’s too late. It’s amazing how many women don’t know anything about how to detect an illness, such as cancer, by basically just touching and observing themselves.”

Sofia presents her women as diverse, but what they all have in common is a true and burning confidence. When describing them, she says that they’re not goddesses in the mythological sense of the word. “They are not invincible and most of all, they are not fearless. They are everyday women living everyday struggles who have learnt to embrace their version of femininity and their weaknesses in order to become a stronger, kinder, elevated version of themselves,” Sofia tells High on Design. “When I illustrate them I think of them as my role model, the woman I strive to become one day.”

Alongside the accurate and poignant works she posts online, Sofia often includes strong captions that definitely know how to make a statement and evoke emotion on social media. Addressing themes of body image amongst women and the LGBTQ+ community, her words also have a part to play in spreading a message of acceptance.

Sofia wishes to harness the power of Instagram and other platforms with her artwork to help create the kind of world she wants to live in. “When I posted the illustration of an unbothered man brushing his pink wig, I was overwhelmed and shocked by the amount of hate it got. Seriously, what’s wrong with it? It’s just a wig!” Sofia exclaims. “Inclusive illustrations and viral art have the power to normalise and de-demonise diverse, queer and transgender people to the eyes of those less exposed to the community. Everyone feels represented and supported, with no need to hide. It’s a little step towards creating a respectful, or at least non-violent, society.”

For Sofia, there isn’t one piece of work that she’s proudest of. They are all of equal importance, even those that she describes as “ugly and flawed.” For her, each of her pieces serve the purpose of expressing who she is, what she believes in, and her growth and path as an artist. And we can’t wait to see where else this wonderful path will lead her.

Check out more of Sofia’s works on her Wix website.

Just two days after the twentieth anniversary of her father’s murder, another tragedy occured: the massacre at Marjory Stoneman Douglas High School in Parkland, Florida. “I fell back into a vicarious grief mode for those families,” says Kristina Filler, NYC-based illustrator.

Kristina had spent the few months leading up to the event putting together an illustrated commemoration of her father’s life, made up of photos and stories collected from family and friends. “I shared it with everyone, we all had a cry about it and I felt like I was partially cured of my grief,” says Kristina. But this “shiny, gleaming bit of temporary relief” was diminished two days later when she heard about the Parkland shooting. “I was in high school when my dad was killed (at the school he taught at), so a lot of what those students were going through hit really close to home. I spent an evening privately crying for them while listening to the news coverage.” 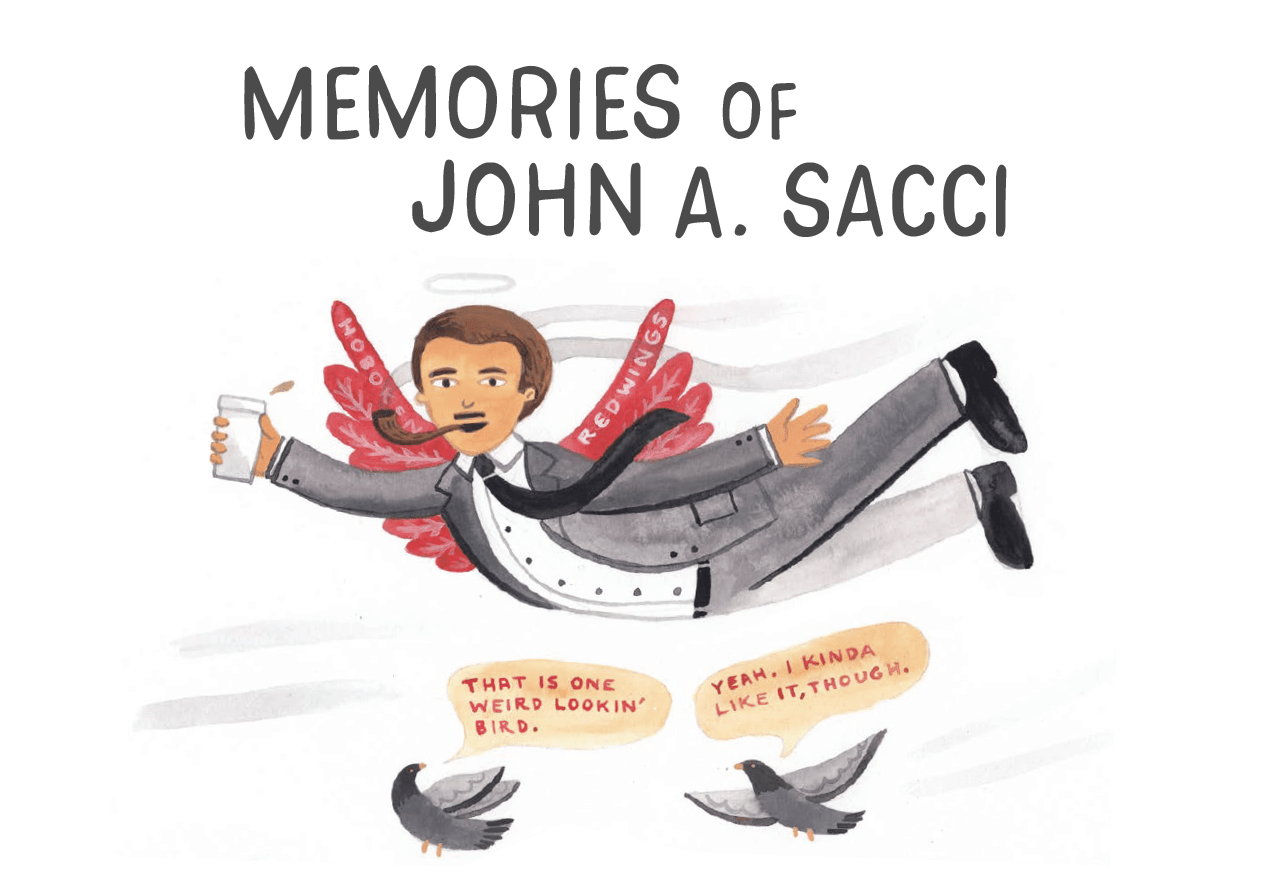 Part of the illustrated commemoration Kristina made in memory of her father’s life.

That was when Kristina first painted the Hold Your Fire bird. Encouraged by her husband, she printed her illustration onto a shirt using Bonfire, a platform that enables you to point your proceeds towards charitable and nonprofit organizations. Having now sold 900 shirts and raised $10,000 towards gun safety, Kristina donates all her proceeds to Everytown, a gun safety organization. 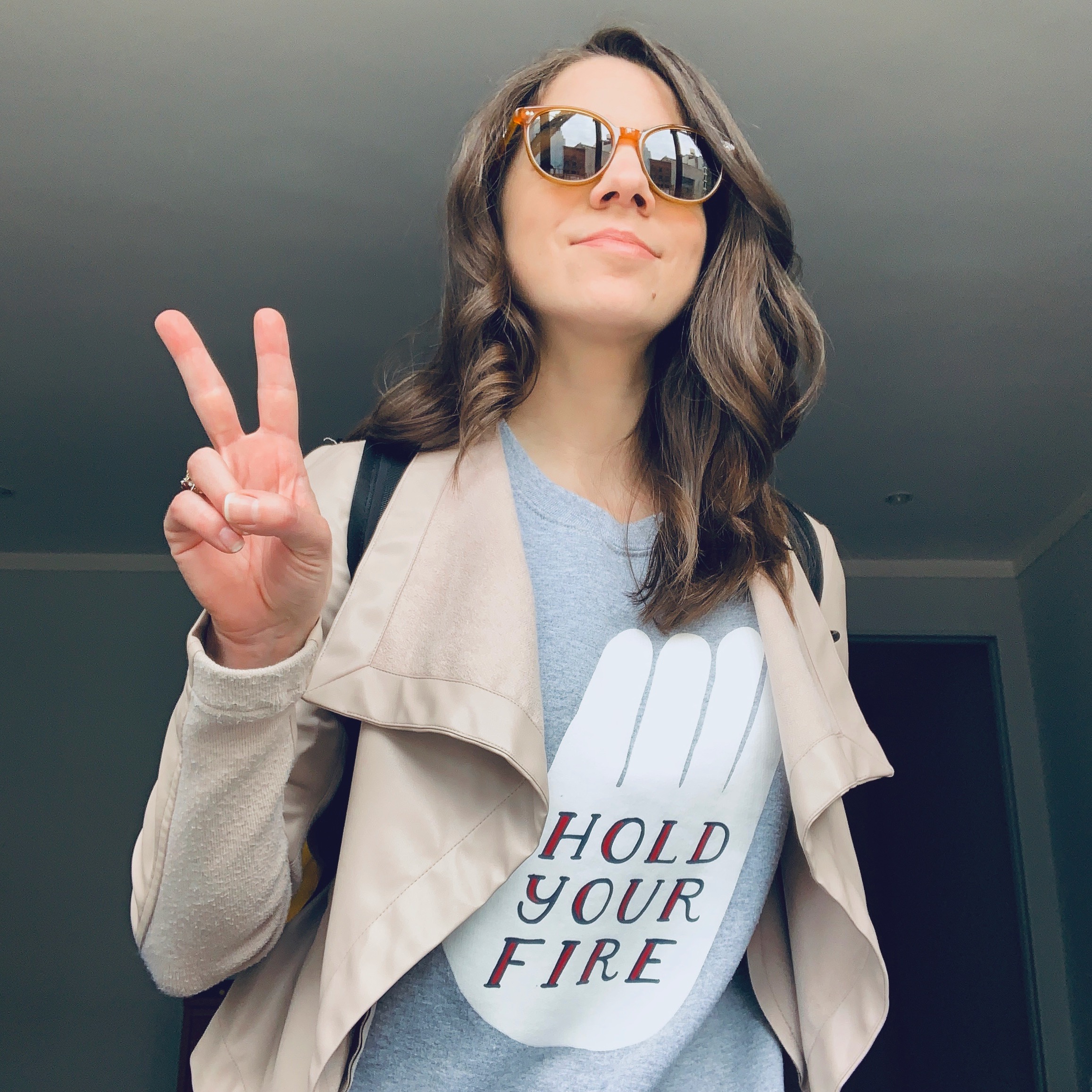 The original painting of the Hold Your Fire bird, and Kristina wearing the t-shirt.

Despite the fear of going public with her family’s story, Kristina says that the response has been overwhelmingly comforting. “I have a big network of family and friends and am pretty sure that every single human I’ve ever come in contact with has bought one [a shirt],” she tells High on Design. “Every time I promote Hold Your Fire, I try to keep the story light or even funny so that good feelings can be associated with the shirt and people feel encouraged to stay involved.”

Although Hold Your Fire was “only ever meant to be a t-shirt” according to Kristina, a number of other supporting projects have emerged as a result. Other than reaching out to various networks, some of which have shared the story (check out the links on the footer of the website), Kristina has also since spoken at events, started a podcast and more.

Another mini campaign Kristina initiated was a Gunsense Holiday Gift Guide, whose aim was to “show consumers that they could put their dollars towards companies that supported safer gun laws.” By sharing illustrated guides on which brands support gun safety and which don’t (take note of the heartwarmingly unthreatening “naughty list”), she uses illustration as a tool to communicate serious and important ideas in a light, often comic, manner.

Despite the success and support that Kristina is so grateful for, she says that it hasn’t all been sunshine and rainbows, having faced rejections and hateful messages. But she keeps pushing on. A sentence she heard by a city councilwoman who runs a chapter of Moms Demand Action in Hoboken, NJ, helps keep her motivated: “it’s not a sprint – it’s a marathon.” And Kristina has many more plans for the future of Hold Your Fire, from partnering with gun sense organizations, to painting her design on the side of a building.

Kristina speaks of the rich history illustration has in activism, mentioning protest signs, t-shirts and ads for rallies or political parties. “Making activism-based illustrations feels like you’re participating in a deep movement that connects to a lot of people,” she says. “Personally speaking, my dad was a history teacher, so I like to think of my political work as also being a little bit of a connector with him and I.”

She also finds that there’s power in combining things that you love and feel strongly about. “I love drawing, and gun violence is a topic that runs so deeply with me. The combination of passions can produce effective illustrations – or